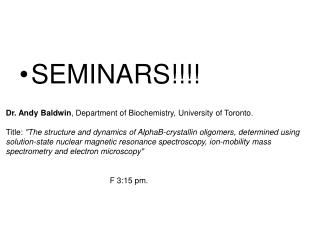 First-Year Seminars - . in short, the weight of evidence indicates that fys participation has statistically significant

Being in Business Seminars - Adds up to better business. being in business seminars. australian college of mental health

Getting Ready for the Seminars - . eng 4u1. what is a seminar?. a focused presentation on a topic by a group of people

Socratic Seminars - . what? how? why?. socratic seminars. your turn. on edmodo post an answer to the following query: how

Socratic Seminars - . where questions, not answers, are the driving force in thinking. what does socratic mean?. socratic

English presentation skills: seminars in chemical biology - . tell me and i'll forget show me and i may remember involve