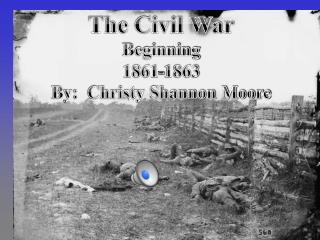 The Civil War Beginning 1861-1863 By: Christy Shannon Moore. A Battle By Two Names??. Union-landmark Confederates-city Ex. The Battle of Shiloh or The Battle of Pittsburgh Landing. Theaters of War. An area of the war where the majority of the battles take place. (land, sea, air).

The American Civil War 1861-1865 - . the confederacy. the union. the presidents during the civil war. abraham

Events of the Civil War - . by conor diggs (garr) yuliza cruz. firing on fort sumter. it took place in south carolina it

Ending the Civil War - The beginning of 1863 had gone well for the confederacy. they had won at chancellorville.

Portrait of Abraham Lincoln taken around the time he wrote the Gettysburg Address (1863). - The civil war begins,