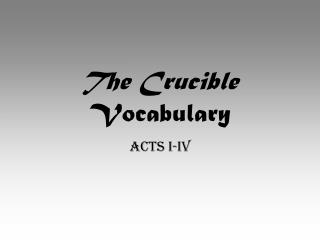 The Crucible Vocabulary. Acts I-IV. inert. adjective Having no power of action, motion or resistance; inactive or unable to react She was lying inert in her bed when her mother tried to wake her for school. somber. adjective Gloomily dark; depressing or dismal; serious

Theatre Vocabulary - . some key words and phrases we will be using this year…. actor vocabulary- terms about the

Expanding Vocabulary Development in Young Children - . what research says about why, how, and what . reading first