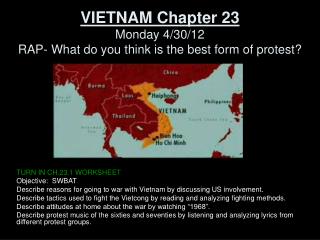 VIETNAM Chapter 23 Monday 4/30/12 RAP- What do you think is the best form of protest?. TURN IN CH.23.1 WORKSHEET Objective: SWBAT Describe reasons for going to war with Vietnam by discussing US involvement. Describe tactics used to fight the Vietcong by reading and analyzing fighting methods.