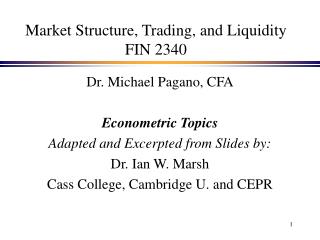 LIQUIDITY AND CREDIT - . liquidity involves a firm’s capacity to generate cash to meet cash demands as they occur and

Liquidity - . students should be able to. define liquidity risk and explain why it is important for banks. describe

Measuring Market Liquidity - Market liquidity. being able to trade the quantity you want to trade with minimal price

Market Structure and Pricing - . learning outcomes. by studying this section students will be able to: understand how and

Costs and Market Structure - . basic ideas. determinants of market structure: how many firms in an industry? economies of