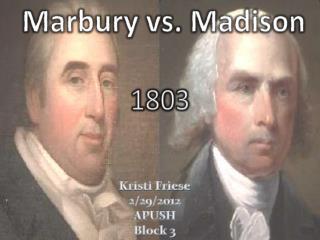 Marbury vs. Madison. Kristi Friese 2/29/2012 APUSH Block 3. 1803. Issues. John Adams promised jobs to people before the end of his term. When Jefferson came into office, he told James Madison to deny the people their jobs. William Marbury sued Madison when he was told.

Block by Block Preparation of the SF 361, Transportation Discrepancy Report (TDR) - . this is the front side of the sf

Apushreview - Www.apushreview.com. apush review: rebellions and conflict in the colonial era. everything you need to know

Marbury v. Madison - . setting the scene. with his presidential victory in the 1800 election, thomas jefferson entered