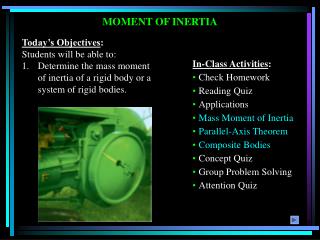 MOMENT OF INERTIA. Today’s Objectives : Students will be able to: Determine the mass moment of inertia of a rigid body or a system of rigid bodies. In-Class Activities : • Check Homework • Reading Quiz • Applications • Mass Moment of Inertia • Parallel-Axis Theorem

PASS Content Standard 1.1 - . matter is made up of minute particles called atoms, and atoms are composed of even smaller

MOMENT OF INERTIA - . by gp capt nc chattopadhyay. what is moment of inertia?. it is the moment required by a solid body