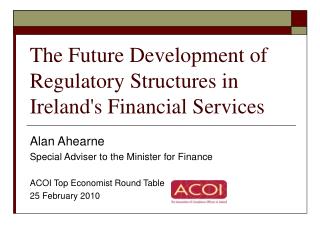 The Future Development of Regulatory Structures in Ireland's Financial Services

The Future Development of Regulatory Structures in Ireland's Financial Services. Alan Ahearne Special Adviser to the Minister for Finance ACOI Top Economist Round Table 25 February 2010. Outline. Some lessons from the crisis.

The Future Development of Regulatory Structures in Ireland's Financial Services

Governance and Stewardship of Credit Unions - . at the end of this unit, students will be able to:. understand the term

Chapter 3 SECURITIES MARKET The Battlefield - . outline structure of the securities market • participants in the

STATOIL NORWAY - . committed to accommodating the world's energy needs in a responsible manner, applying technology and

Technical Progress introduction - . the technical progress in the solow model, the exogenous cause of the growth of per