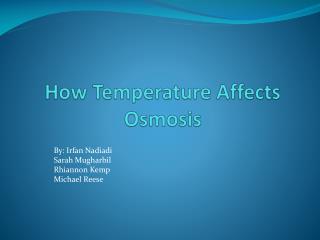 How Temperature Affects Osmosis. By: Irfan Nadiadi Sarah Mugharbil Rhiannon Kemp Michael Reese. Hypothesis. The rate of Osmosis depends on the Kinetic Energy of the particles being diffused. How Climate Affects Vegetation - . unit 2, section 4. climate and vegetation. each climate has its own type of natural

How Inclusion Affects Learning - . by: courtney stratton, michelle santoro, mary hancock. inclusion . the idea that all

How suicide affects families - 3 main ways families deal with it. several ways you can get out anger. you need to learn

How Alcohol Affects You - . by bryan j. gittins. what is alcohol?. alcohol is created when grains, fruits, or vegetables

How Stress Affects Vision - Are you looking for clearer vision? chu vision provides the latest technology and helps you