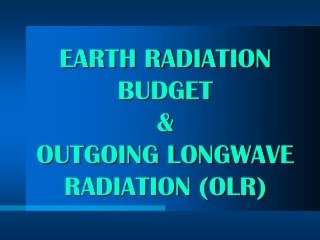 Background Radiation - . 3/4ths of all exposure to radiation comes from background radiation . most of the remaining ¼

SUNSCREENS - . skin damage from radiation is cumulative whether sunburn occurs or not. annual incidence: 500,000 cases of

Climate - . heat balance of the earth distribution pattern of insolation ( 日射 ) interrelationship among the global

The Greenhouse Effect - . some atmospheric basics. the greenhouse effect radiant energy that is absorbed heats earth and

Radiation - . basics of radiation. energy that comes from a source and travels through material or space. light, heat and