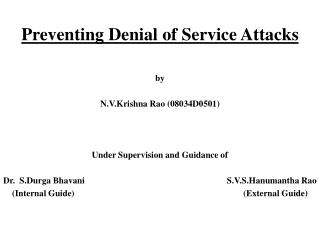 Preventing Backing Accidents - . did you know?. backing accidents account for 1 out of 3 collisions in reality even more

SSH Timing Attacks - &quot;using encryption on the internet is the equivalent of arranging an armored car to deliver

Preventing Injuries through Fitness Training - . mrs. marr sports med i. objectives. the student will- discuss the

Preventing injuries from manual tasks in the workplace - . a risk management approach. purpose of this workshop. at the

Denial of Service - . denial of service attacks. unlike other forms of computer attacks, goal isn’t access or theft of

A current analysis of man in the middle (mitm) attacks - . sachin deodhar &lt;sdeodhar@kpmg.com&gt;. the

Denial of Service Attacks Targeting U.S. Financial Institutions - . january 2013. agenda. what is ddos who’s behind the