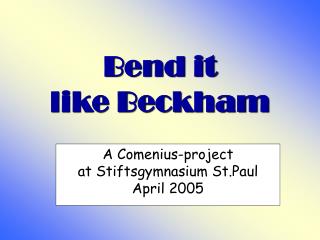 A Comenius-project at Stiftsgymnasium St.Paul April 2005. Bend it like Beckham. I. What the story is about. … it is not only about an Indian girl who likes playing football but also about …. Teenager problems. The clash between traditional values and the modern world. First love.

SAFE LIFTING TECHNIQUES Quick lifting tips: - Before lifting, make sure your path is dry and clear of objects that could