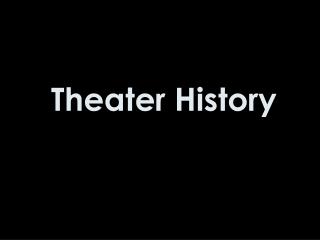 Theater History. Alright now would be a good time to take notes. No really, this will for sure be on a test…soon. . Please? . Medieval and Renaissance Theater. “Oh, how fine it is to know a thing or two.” -Moliere. Theater History - . “possibly more true to history than history itself”. introduction. why should you bother to study

History of Theater - . drama unit mrs. bartel. the acropolis in athens, greece. the theater of dionysus. what is

A History of Theater - . more than you ever wanted to know about where all this drama stuff comes from—turns out it’s

Theater - . bambang purwanto. movie/film. a recording of moving images that tells a story and that people watch on a

Epic Theater as Pedagogical Theater - . last time… one of the goals of epic theater is to interrupt our pity, doing so

National Theater - . by: michael hoff. the national theater. the theatre was commissioned in 1810 by king maximilian i of