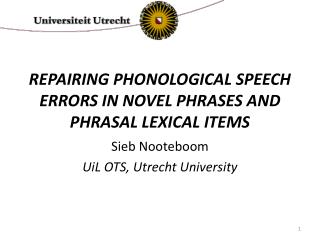 Language Development and the Brain: A Phonological Perspective Usha Goswami - Centre for neuroscience in education

Phrases &amp; Clauses - . henderson. phrases. a phrase is a group of words that behaves as one particular part of

Programming Errors - . lexical errors – occur whenever karel reads a word that is not in his vocabulary. example in

Semantics 1: Lexical Semantics - . ling400. what is semantics?. semantics is the study of the linguistic meaning of

Parts of Speech - . preparing for your upcoming project. standard for mastery. literacy: l7.4 determine or clarify the

From Sound to Sense and back again: The integration of lexical and speech processes - . david gow massachusetts general