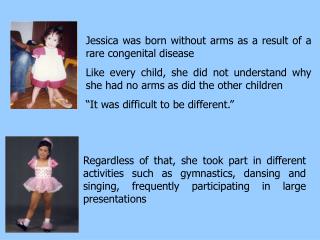 Jessica was born without arms as a result of a rare congenital disease Like every child, she did not understand why she had no arms as did the other children “It was difficult to be different.”.

Prion Diseases - . presentation, epidemiology, guidance and management. welcome to this module on prion disease. these

Disease as a failure of homeostasis - . disease basics. immune system: the video clip. disease: what is it?. disease :

LYME DISEASE and Tick-born Co-Infections Dr. Emily Maiella 413.230.4462 - . introduction. what is lyme disease how is