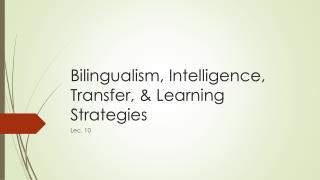 BILINGUALISM AND DIGLOSSIA IN SPAIN - . defining individual bilingualism. what is bilingualism? definitions: weinreich

Transfer of Learning - 2. objectives/major concepts . describe transfer of learning and why it is importantdiscuss

Bilingualism and Foreign Language Learning: Some reflections on a neglected topic - . dieter wolff (beijing, may 2007).

January 2018 - Focus &amp; within course coherence in high school. january 2018. we know from experience the hard

Learning, Memory, and Intelligence - . “the question we have to ask is “is our children learning?’” president

Transfer of Learning - . transfer. learning of new skill or performance in new situation influenced by past experience.