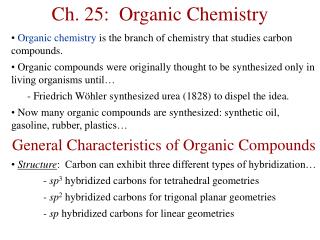 Ch. 25: Organic Chemistry. Organic chemistry is the branch of chemistry that studies carbon compounds. Organic compounds were originally thought to be synthesized only in living organisms until… - Friedrich W ö hler synthesized urea (1828) to dispel the idea.