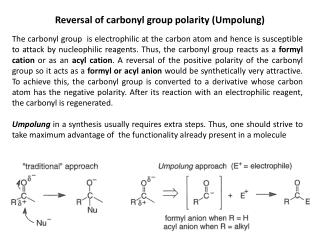 SYNTHETIC EQUIVALENT GROUPS - . cyclohexenone is reactive toward nucleophiles. it is often advantageous to combine the

Carbenes, :CH 2 - . preparation of simple carbenes. 1. carbene. 2. mechanism of the a elimination. reactions of carbenes,