The Shoulders on Which We Stand - PowerPoint PPT Presentation 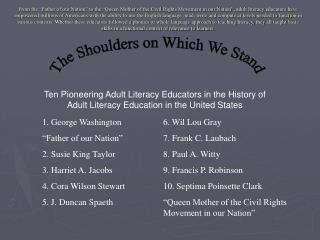 The Shoulders on Which We Stand

The Shoulders on Which We Stand

EFFECTIVE BODY LANGUAGE - . february 26, 2007. what is body language?. the dictionary gives this definition to 'body

Shoulders of Giants - . “if i have seen further... it is by standing on the shoulders of giants....” isaac newton

Body Mechanics - . the back you save can be your own. posture counts!. head up shoulders back chest out stomach and

Classification Measurements - . before you continue …. !. choose “slide show” from the menu at the top of the

Manual Handling and Stretching - . simple stretches to reduce the risk of suffering an injury. by completing the

Precious Lord, Take My Hand By Thomas A. Dorsey - . precious lord, take my hand, lead me on, help me stand; i am tired, i

The Power of the Seed - . what does a seed represent?. 1 peter 1:23. “for you have been born again, not of perishable

Freak the Mighty - . book talk by davan gardner. max and freak go to the millpond to watch fireworks and they encounter a

Preston at C olonus - . be. i have not a clue where i’m going. all i know is that i was banned from my city and now

Doors - . deuteronomy 6:9 write them on the doorframes of your houses and on your gates. mezuzah. samson and the door of

Anointing - . victory producing power. isaiah 10:27. in that day their burden will be lifted from your shoulders, their

Family Life, Military Style - . the silent ranks. i wear no uniform, no dress blues or army greens. but i am among the