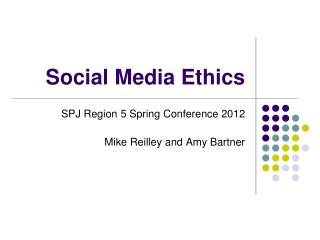 Social Media - . how communities are using it now…. linda balcom. http://www.youtube.com/watch?v=z4gt62uaase. the world

Media ethics - . a conclusion. ethics conclusion. in this class we’ve tried to touch on a variety of ethics problems

Ethics – Social Justice - . layout of class. open discussion critical thinking / examination of self of others of

Media Ethics - . is that an oxymoron?. getting it right the news. fairness in media means pursuing the truth with both

Media Ethics - . walter williams creed. i believe in the profession of

Ethics in Media - Media law (quick and simple). prior restraint: censoring information before the information appears or

Ethics and Media Ethics - . adapted by dr. mike downing from news reporting and writing , eighth edition. what are