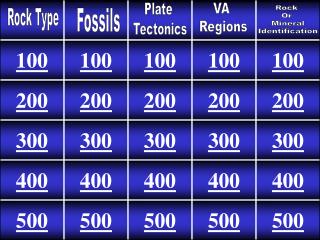 Plate Tectonics. VA Regions. Rock Or Mineral Identification. Rock Type. Fossils. Rock Type 100 pts. I form either inside or outside of the volcano. Igneous Rock. I am the only rock type that has fossils. Rock Type 200 pts. Sedimentary Rock. Rock Type 300 pts. Geology Rock, Rock On - . part 1 age of earth and scientific classification part 2 plate tectonics and water. how to take

Geology Rock, Rock On - . part 1 age of earth and scientific classification part 2 plate tectonics. how old is the

Rock! - Rocks. rock!. if you think rocks are boring. think again!. rocks are all around us!. have you ever wondered where