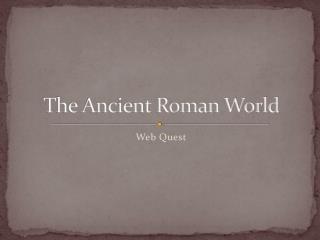 Ancient Rome: The Rise of Christianity - . world history. entering a time of peace. under julius caesar, rome became an

Ancient Rome Vocabulary-write on p. 82 of your Inbook - . republic-a form of government with elected leaders patrician-a

The Empire After Augustus Ancient Rome