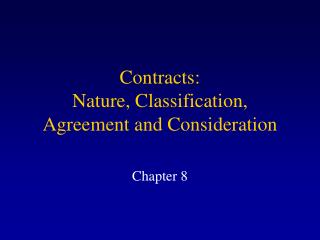 Contracts: Nature, Classification, Agreement and Consideration. Chapter 8. Contracts: Basic Principles. A contract is an agreement between two or more parties to perform or to refrain from some act now or in the future enforceable by the courts. Contracts: Requirements.

Chapter 3 Agreement: Offer and Acceptance - . introduction. offer and acceptance and consideration and no lack of

Chapter 4: Consideration and Estoppel - . the need for consideration. nearly always required must move from the promisee

Alteration promises on the back of an original contract - enforceable?

QUESTION FOR CONSIDERATION: - In today’s society, what are some of the greatest concerns and changes taking place in

Chapter 12: Nature and Classes of Contracts: Contracting on the Internet - . offer. contract. acceptance. definition of

Quasi Contract - . kinds of quasi-contract. supply of necessaries payment by an interested person for protection of

Ch 9 CONTRACTS - . a contract is a: promise or set of promises, and if someone breaches or breaks contract you can sue

Chapter 9: Contracts – Consideration, Capacity, and Legality - . learning objectives. what is consideration? what is

Chapter 8: Contracts – Agreement in Traditional and E-Contracts - . learning objectives. what elements are necessary

Contracts - . introduction. contracts are the basis of many daily activities. they provide the means for individuals and

INTRODUCTION TO CONTRACTS - . “contracts are agreements made up of big words and little type.” sam ewing, quoted in