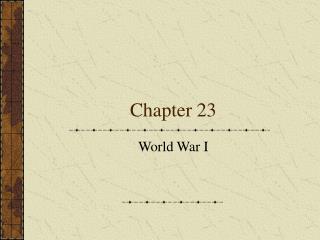 Chapter 23. World War I. Section One. Powder keg in Europe. Nationalism. Nationalism is A feeling of intense loyalty to one’s country or group. Ethic Groups – people who shared a common language and traditions , felt that their traditions were better than other nations. Expansion.

Chapter 23* - . ecology and the environment. the organization of ecological systems. the smallest living unit is the