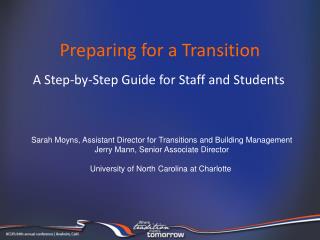 Preparing for a Transition Preparing for a Transition

Transition Metals and Coordination Chemistry - . chapter 23. transition metals. similarities within a given period and

Preparing Students to Succeed in the World that Awaits Them: Secondary Transition in Massachusetts - . comprehensive

Transition to Extrauterine Life - . pulmonary system transition. function of respiration switches from the placenta to

QUALITY OF LIFE IN THE THIRD AGE Blueprinting Best Practices in Transition Planning - . why blueprinting?. move to

PREPARING LABORATORY SOLUTIONS AND REAGENTS I - . chapter 21. topics. where do solution recipes come from? concentration