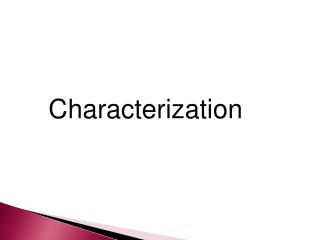 Characterization. What is a Character?. Character : a person or animal (or even robot) that takes part in the action of a piece of fiction Protagonist and Antagonist Protagonist: Main character in a story, action and conflict in the story revolves around them

Great Expectations - . a brief background on dickens’s life, and an analysis of setting, plot, conflict, symbolism,

3.1 - . characterization of waiting systems notation queuing strategies prior i ties behavi o ur of requests. what about

Methods of Media Characterization - . a challenging area of rapid advancement.

Mechanisms of Catalytic Reactions and Characterization of Catalysts - . c. s. s. t. l. a. i. a. y. what is a catalyst