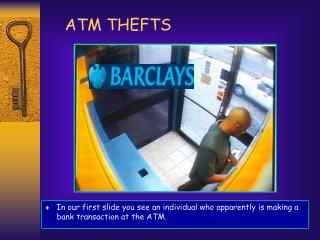 ATM THEFTS. In our first slide you see an individual who apparently is making a bank transaction at the ATM. Placing the trap. What he really is doing is placing a trap in the ATM machine to “capture” the next user card. Lookout Warning. IDENTITY THEFT EPIDEMIC - . how can we protect ourselves. hint: this is not the answer to #1. identity theft is the

ATM THEFTS - . in our first slide you see an individual who apparently is making a bank transaction at the atm. placing

Top 10 RFID blocking wallet - Thefts of new kind, meaning identity thefts are commonplace these days. but if you start

- Make a single graph to answer this question : in 2007 what percentage of nonfatal crimes reported by females were

How to Reinstate Bike Insurance Plans? - Accidents or thefts not only take a toll on your life and health, but also your

Card to card transfer has made online monetary transactions easier - Have to send money online? opt for our easy to use,

What are some pot austin marijuana lawyer? - Http://gyounglaw.com/index.html if you or someone you love needs a