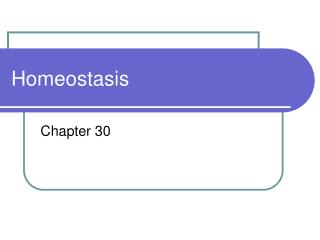 The Nervous System - . chapter 7. functions of the nervous system. master controlling and communicating system of the

Organ Systems Week 1 - . lpa 2013-2014 standard 3. monday objective. i will describe the structure and function of animal

Chapter 9 Homeostasis and Circulation - . biology 2201. dynamic equilibrium. a state of balance in an environment

CHAPTER 15 - . introduction to the clinical laboratory. pretest. true or false. when the body is in homeostasis, an

3.4.1 --- HOMEOSTASIS - . objectives – what you will need to know from this section. define the term: homeostasis .