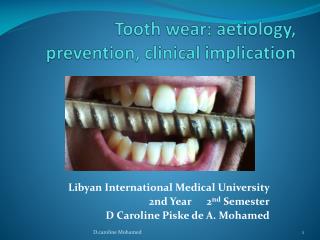 What is Blue Tooth ? - . blue tooth is a cable replacement technology that can be used to connect almost any device to

Aging White-tailed deer by tooth wear and replacement - . number of points not correlated with age. aging

Xylitol Use and Prevention of Tooth Decay - . feasibility and impact of twice daily tooth brushing at head start.

The tooth and surrounding structures - . unclassified//rel to nato/isaf. objectives. identify the divisions of the tooth,

A new system for recording tooth wear on pig teeth - . and its application to the neolithic assemblage of durrington

Asasantin Retard in Stroke Prevention : a Clinical and Business Perspective - . by dr u ahmed consultant physician,