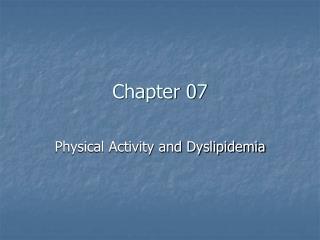 Chapter 07. Physical Activity and Dyslipidemia. Hypercholesterolemia : is defined as levels of total serum cholesterol that exceed the population average of 200mg/dl among adults. Chapter 07 - . learning. learning. a relatively permanent change in behavior due to experience. classical conditioning. a

Chapter 07 - . function 2. arguments passed by value. in the functions seen earlier, arguments have always been call by

Chapter 07 - . physical activity and hypertension. hypertension is defined in an adult as a blood pressure greater than

Chapter -07 - . summary . different ways to structure is activities in an organisation