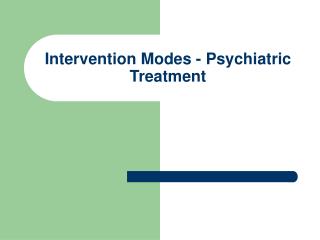 Treatment Efficacy in Phonological Intervention - . what are the variables in treatment efficacy?. what is treatment

Providing Context at Psychiatric Appointments - . what psychiatric prescribers need to know when assessing and treating

Digital Modes - . there are lots of digital modes. the oldest is rtty (teletype - in this case it is radio teletype). the