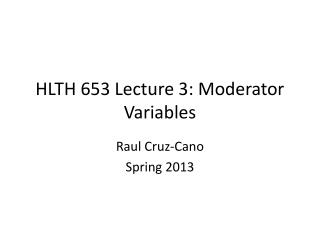 Moderators - . definition. moderator - a third variable that conditions the relations of two other variables sat-q and

Helping a student with an Eating Disorder - . what hinders &amp; what helps by vathani navasothy eating disorder

Lecture 4 - . working with objects: variables, containment, and association. what we already know how to do. call methods

Chapter 8 - . dummy variables and truncated variables. what is in this chapter?. this chapter relaxes the assumption made