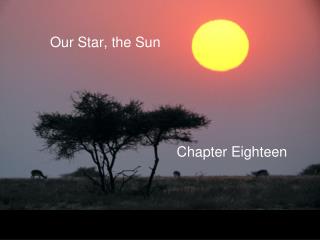 Our Star, the Sun Our Star, the Sun. Chapter Eighteen. Guiding Questions. What is the source of the Sun’s energy? What is the internal structure of the Sun? How can astronomers measure the properties of the Sun’s interior? How can we be sure that thermonuclear reactions are happening in the Sun’s core?

Our Star, the Sun

Glasgow University Astrosoc presents - . 30 th oct 2001. the physics of star wars. a long time ago, in a galaxy far, far

Josh Winn - Models for the eclipses of the t tauri star kh 15d: occultation mapping of a pre-main-sequence star. josh

Chapter 17 Star Stuff - . 17.1 lives in the balance. our goals for learning how does a star’s mass affect nuclear

2008 STAR Interpreting and Using Results - August/september 2008 objectives workshop participants will be able to:

The Sun Closest Star to Earth - . characteristics of the sun. size the sun measures 1.4 million kilometers across. 110

Our Solar System - . (an introductory tour). solar system formation. thanks to mary oshana. our favorite star. what are