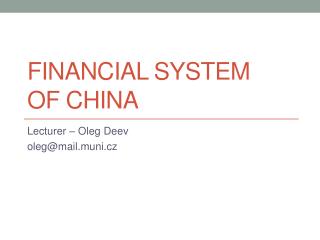 Fang Ji June 15, 2004 - The comparison of financial institutions, markets &amp; instruments in china &amp; us and

Net Assessment: The Chinese Financial System - . he who is contented is rich. - lao-tzu. to begin: land and labor. 10