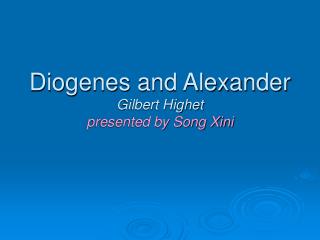 Unit 10 Diogenes and Alexander - . discussions:. 1.if the world were to follow diogenes, what would be the results?

Presented by Gilbert Mbara and Elizabeth Rivard - Do domestic firms learn how to export from multinationals? and does

Windows 7 Presented By- Tonia Alexander - . what do we have now…. the new look. are you wondering about the new windows

By M. Almone, G. Conte Presented by Yinglei Song - A class of generalized stochastic petri nets for the performance

By Alexander - Rhinos. by alexander. introduction. hello! my name is alexander lee. my presentation is about rhinos so

Presented By Alexander Eggermont at 2014 ASCO Annual Meeting - Ipilimumab versus placebo after &lt;br

by: Alexander Harrison - . people can have a lot of fun at c arl schurz park . kids are having fun playing basketball in