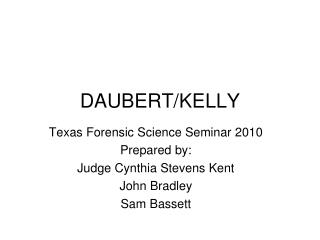 History and Development - . introduction. students will learn:. how a crime lab works the growth and development of

ICD-10-CM Psychological and Behavioral Disorders - . regulatory requirements and relationship to clinical use of dsm-5

Eyewitness Testimony - . ms. de bari december 1, 2009. how much do you know?. how much emphasis does the legal system

George Kelly - . &quot;on wednesday, when the sky is blue, and i have nothing else to do, i sometimes wonder if it's

George Kelly - . personal construct theory. i. biography: 1905-1967. george kelly was born in a farming community near

Paper Beads Beatty Kelly and Taylor Normand - . what are paper beads?. handmade jewelry that is cost-efficient,