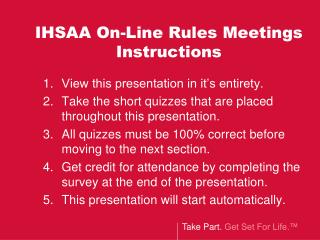 IHSAA On-Line Rules Meetings Instructions. 1. View this presentation in it’s entirety. 2. Take the short quizzes that are placed throughout this presentation. 3. All quizzes must be 100% correct before moving to the next section. Meetings - Today’s Ground Rules - . check egos and titles at the door if you don’t understand something, ask for

Instructions for On Line feeding of IWMP projects - . (on departmental website). 1. open internet explorer and write

“Cooperative on-line programs: What’s with all the rules?” - . ed miller oklahoma state university. who are your

World Café on Meetings - . round 1 questions: in your group, talk about a meeting or workshop that you took part in