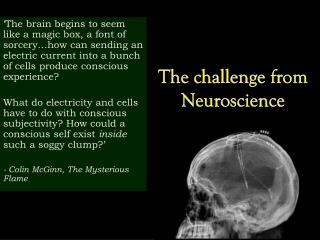 The challenge from Neuroscience The challenge from Neuroscience. ‘The brain begins to seem like a magic box, a font of sorcery…how can sending an electric current into a bunch of cells produce conscious experience?

The challenge from Neuroscience

New dimensions to the social brain: What’s So Social About the Social Brain? - . robin dunbar department of

The Neuroscience of Music - . main points. music is like language characterized by rhythmic sequential sounds has syntax:

Institute on Neuroscience ION/Teach - . build-a-brain!. this is your brain. directional terms. middle english words for

Successful Coaching  Based on the Newest Neuroscience: - What coaching can do for the adult with adhd. dr. virginia

Chapter 2: Neuroscience - . neurons and neurotransmitters. origins of studying the brain. plato believed that the mind

Drugs and the Brain: The Challenge of Schizophrenia - . david a. lewis, md translational neuroscience program department

Neuroscience of Learning - . by juan garcia and candice markham. the brain. this chapter addresses the relation of the

Neuroscience, Addiction and the Gospel - . dr alan gijsbers . outline . the challenge to iscast issues in neuroscience

Neuroscience and Behavior - . most information in this presentation is taken directly from uccp content, unless otherwise