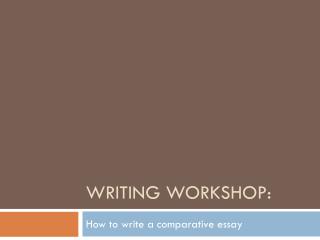 Writing Workshop:. How to write a comparative essay. The Basics. Choosing a question Formulating a thesis Crafting an introduction Organizing and writing the body Summing it up in a conclusion Good essay habits. Choosing a Question. Three options Read each carefully Highlight key words Writing - . in first grade , students will engage in the writing process, communicate ideas in writing, focus on grammar,

Writing and phonics workshop - . ivy gardens children’s centre. what will we be doing?. how children learn to write and

Welcome Back, 3/4 Team! - . learning. growing.transforming. index card. side 1: how is writing workshop different from

Writing Workshop - . managing mla documentation: it’s not that tedious. what is a parenthetical citation?. mla style

Writing Workshop - . writing an academic essay. finding your thesis. think and brainstorm to find a focus/thesis that you