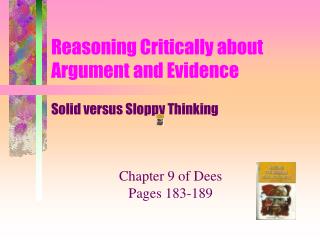 Reasoning Critically about Argument and Evidence Reasoning Critically about Argument and Evidence

ARGUMENT 101 - . what do you think about when you see the word “argument”?. argument attempts to resolve issues

Fundamentals of Writing - . april 3, 2014. what is the author trying to argue? how does he/she support his/her point?

Truth-Tables - . recap. deductive validity. we say that an argument is deductively valid when it has the following