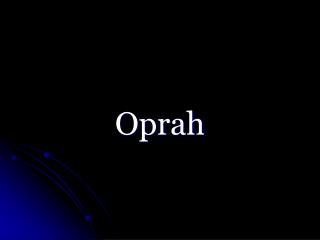 Oprah. Brad Pitt. Adam Sandler. Mellessa Gay Denny. What do these people have in common?!?!?. One thing, and one thing only…. SPEECH & DEBATE. The benefits of speech are innumerable…. Speech offers an outlet to conquer your fears of public speaking. The Wisdom of Oprah Winfrey: 29 Oprah Quotes about Business, Success and Life - [visit

Inspirational Women - . mollie anderson director uno human resources. &quot;it doesn't matter who you are, where you

Famous American Women ! - . who am i ?. she was the first african-american woman to own her own production company also a