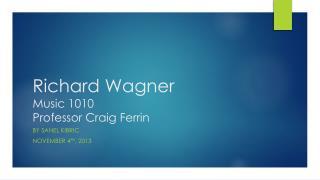 Richard Wagner - . the life of richie. richard wagner was born on may 22, 1813, in leipzig, germany, into a middle-class

by Dr. Corinne Whitby - Rapid and sensitive detection of mrsa  by pcr-based methods in the environment and hospital

Bob Dylan - . by peter wagner. why bob dylan?. he’s influential i like his music he’s a cultural icon to learn more

Bob Dylan - Early life. early music. music career. bob dylan. “all i can do is be me, whoever that is.” ~bob dylan.

Music 1010 - . semester presentation by sarah caverni. pyotr ilyich tchaikovsky . the life and music of an amazing

Spring Music 1010 - . semester presentation. kacey musgraves- the modern day dolly parton. by amy cardoza. she is who she