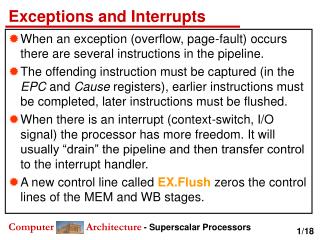 Interrupts - . all modern processors have some mechanism to allow peripherals/auxiliary circuitry to get the attention of

Lect 14: Interrupt and Exception - . types of interrupts and exceptions. interrupt service routine: see fig 12.1 up to

8051 Interrupts - . interrupts programming. an interrupt is an external or internal event that interrupts the

What are Exception and Interrupts? - . mips terminology exception: any unexpected change in the internal control flow