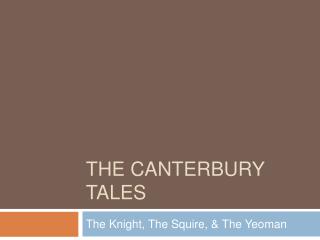 The Canterbury Tales. The Knight, The Squire, & The Yeoman. The Knight. The Knight is usually considered to be an experienced and distinguished professional man-of-arms, motivated by religious ideals.

Pilgrim’s Pride - . nights that begin with k. millers &amp; reeves. pardon me!. about the chaucer. the canterbury

The Spiritual Disciplines Door to Liberation - . i go through life as a transient on his way to eternity, made in the

Folktales - . mikids.com. folktales. folktales are stories that were passed down from generation to generation. folktales

The Canterbury Tales - . by geoffrey chaucer 1343-1400. the canterbury tales. was the first fictional piece of literature

The Canterbury Tales - . by: geoffrey chaucer. “and specially from every shires ende of englelond to canterbury they