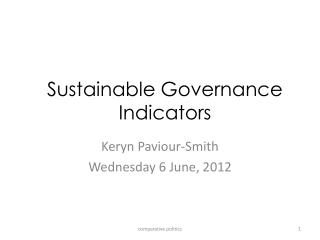 Disaggregating Governance Indicators - . why local governance is important and how it can be measured shipra narang

Sustainable Agriculture Indicators - 2. indicators. activities should be planned and implemented with indicator

Do governance indicators matter? - . empirics of governance seminar washington 1-2 may 2008 nils boesen. the point of