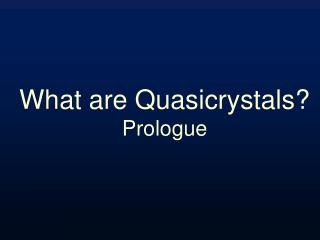 What are Quasicrystals? Prologue. Crystals can only exhibit certain symmetries In crystals, atoms or atomic clusters repeat periodically, a nalogous to a tesselation in 2D constructed from a single type of tile. Try tiling the plane with identical units Prologue - . designer: eric kimsey the following powerpoint presentation was designed to fulfill the requirements of the

Prologue - . a: hola! want to know about ‘conman’, the new interactive tool?? b: thanks , i had enough of this

Prologue - It wasn’t there. t hen it was. later, that was how angela dupre would describe the airplane-over and over,

Prologue - . describe the setting grandma’s house; small town in illinois, during the great depression . prologue. what

What is a prologue? - . an introductory section of a play, speech, or other literary work. it is also applied to the

Prologue - . an introduction to historical inquiry. what is history?. “when does history happen?”. barbara tuchman

Prologue: - . is an opening to a story that establishes the setting and gives background details and other miscellaneous

Prologue: What is Petroleum Coke? - Syngas production from petroleum coke gasification from low to high: a story about

Prologue - . 1 st paragraph: brief summary of the book this should not be cut and paste from a website or copied from the

QUASICRYSTALS - . francesca violich. who discovered them?. the nobel prize. dan shechtman. the 2011 nobel prize in