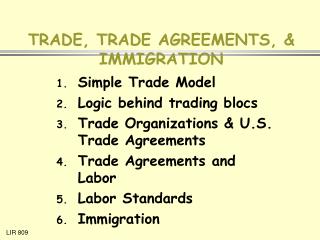 Trade With Israel - A glance at the benefits - - . incentives for trade with israel. swiss companies can take advantage

Regional Trade Agreements - . chapter 8. introduction. “multilateralism” refers to the gatt/wto system as well as the

Trade Negotiations and U.S. Agriculture: Good or Bad? Or Both? - . producers are asking…. what do we get out of trade

Trade Union Policies and Strategies on Free Trade Agreements - . - reject? or govern? -. issues to be discussed. why did