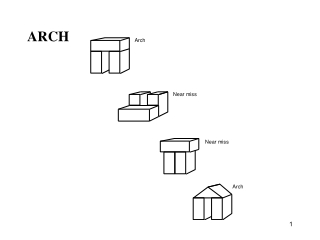 ARCH. Require-Link Heuristic. Forbid-Link Heuristic. Climb-Tree Heuristic. Model-Based Recognition. Greed. This is an exercise about a weak noble and a greedy woman. The noble is married to the woman. Explain why the noble is likely to want to be king. Macbeth. Arch - . adriana gonzález ma. andreina pérez . arch. an arch is a structure that spans a space while supporting weight.

Natural arch - . typically formed by a combination of wind and water narrow ridges are formed and the softer substrata is

Rome - . arch of titus. temple of castor and pollux. column of phocas. temple of vesta. basilica of maxentius and

Foot and Ankle Project - . caitlyn chase 1a. normal/medium arch. what is a medium arch?. pronation you can wear almost

Line Plots and Frequency Tables - . #31. vocabulary. the frequency of a data value is the number of times it occurs. a

Visiting the Gateway Arch - Session 2. passage i. visiting the gateway arch. lead in. a short video. the introduction of