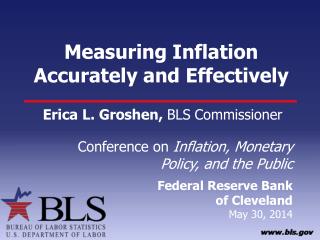 Measuring Inflation Accurately and Effectively. Erica L. Groshen, BLS Commissioner Conference on Inflation, Monetary Policy, and the Public Federal Reserve Bank of Cleveland May 30, 2014. Agenda. What goes into the Consumer Price Index? Idea is simple, execution is not ! Goal and uses Measuring Inflation - . warning: may not be suitable for sl students. how to measure

Accurately Measuring Blood Drops - . how to accurately measure blood spatter in order to find angle of impact (aoi) and

Measuring the Price Level and Inflation - . introduction. what do you think? could you retire in thirty years if you have

Writing concisely and accurately - . importance of concise writing. to keep our reader’s attention to make sure our