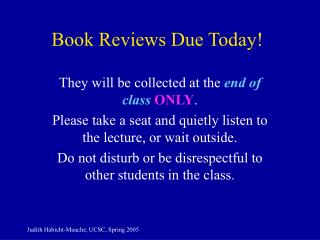 Book Reviews Due Today!. They will be collected at the end of class ONLY . Please take a seat and quietly listen to the lecture, or wait outside. Do not disturb or be disrespectful to other students in the class. Unit 7 Quiz. Must be completed by midnight Friday. We hope you enjoy our book reviews! - . from the fifth grade class at nichols middle school in buffalo, new york. coaty.

In what book do characters follow buffalo? - . the girl who loved wild horses by paul goble. in what book is a character

Systematic Reviews &amp; Meta-Analysis - . an overview. what is a systematic review?. “a review that is conducted